Sale Sold out
Tax included. Shipping calculated at checkout.
NOTIFY ME WHEN IN STOCK

Explore a parallel utopian world where penguins rule and thrive on a stable and beautiful planet. We combined aerial images of adult king penguins in Antarctica brooding chicks with a satellite image of emperor penguin tracks over thin ice at the Halley Bay colony near the Brunt Ice Shelf, Antarctic region. Developed in collaboration with British Antarctic Survey and Maxar Technologies.

Beautiful scarf, with an ecological meaning and ethical process. My daughter bought me this for Mothers day and I absolutely love it. The quality is fab and the colours are so me, thank you. 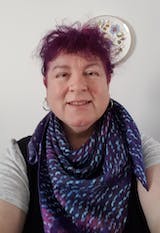